Uniracers is a racing game for the Super Nintendo. In Uniracers the player is an unmanned unicycle that races through a set track consisting of loops, ramps, twists and turns trying to reach the finish line as fast as possible. Uniracers has a single player mode where you race against A.I. racers as well as a two-player mode where you can challenge friends. May the best Uniracers win!

ARE YOU FAST ENOUGH?

In single player mode, you choose from sixteen coloured unicycles based on your preference since all play the same. There are four tours to choose from at first with four visible unlockable tours once the first tours are mastered. Each tour is made up of five tracks with two races, two circuits, and a stunt track. A hidden ninth tour becomes available once all eight are beaten, with extremely difficult races waiting.

IT’S “TRICKY” TO ROCK A UNICYCLE

Your Uniracer can perform tricks while airborne, this is done by hitting any of the face or shoulder buttons. If landed properly, you are given a burst of speed. Doing multiple tricks will result in even more of a boost. Wipe outs will put your racer back to regular speed. So remember to keep your wheel down as you fall back to the track.

In Uniracers two player mode, you play against friends on individual tracks or on entire tours. A horizontal split screen shows player one on top and player two on the bottom with a race to the finish line. Stunt tracks are extra fun by trying to out stunt each other within a set time limit.

Uniracers is a great game with awesome music and fun stunt and racing mechanics. A challenging single player mode will keep players engaged, and a multiplayer mode that will have competitive friends challenging each other over and over. Uniracers will have a special place in any retro gamers collection.

Author: Tom aka The Fobiwan!

Check out Wikipedia for more info on Uniracers! 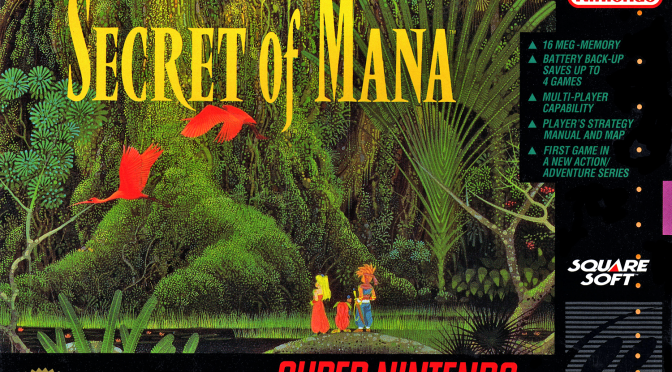 WHAT IS SECRET OF MANA

Secret of Mana is an action/adventure game with RPG elements, originally released for the Super Nintendo. Like many RPG’s at the time, Secret of Mana uses the overhead view. Set in a world where “Mana” is fading, a boy finds a rusty sword hidden by a waterfall where he and the other children from his village of Poto’s are forbidden. Once he finds his way back home and defeats the Mantis Ant boss that is attacking Poto’s village, he is cast out for releasing the sword that is said to protect the village from monsters. During the boys’ adventures, he learns that the Empire is stealing the wills of the people of Pandora. What could the Empire be up to?

FRIENDS ALONG THE WAY

Once the Mantis Ant is killed in Poto’s village, Jema the Knight tells the boy that he is destined to become the Mana Knight and must restore the Mana Sword to its full power. On his journey in the opening quests, the boy meets up with a girl and a sprite. The girl is trying to find out what happened to her soldier boyfriend Dyluck and the sprite is trying to find his way home.

Later the group saves a small baby dragon named Flammie. King Truffle of Matango Village takes care of Flammie while the group continues their journeys. Once the dragon is mature enough he joins the group as a rideable mount.

While journeying the group finds other weapons and magic to help them along the way. Eight weapons (Sword, Axe, Whip, Spear, Bow and Arrow, Boomerang, Javelin and Glove) and eight magics (Water, Fire, Earth, Wind, Light, Dark, Moon, and Wood). Weapons gain new levels by collecting orbs from defeating bosses or from chests along the way. To add the orb to the weapon you need to visit Watts the Blacksmith. Each weapon changes in appearance with each max level gained. All characters gain weapon experience by using said weapon and killing monsters. Every level gained gives a new chargeable attack that is charged by pressing and holding the attack button, upon releasing the button a special attack is unleashed.

Magic is leveled similarly to weapons by instead of orbs, each mana temple has a mana seed. Once the seal is broken on each seed, a new level can be added to each magic elemental type. Each time a spell is cast, experience is gained for that element until 100 is reached and then a level is gained.

Traveling in Secret of Mana is done in three different ways. Walking is the first way to get around. It is also the best way to level both character experience and weapons/magic. The Canon Travel Centres bring you to key zones, but later on they shoot the group off to far away continents. Lastly our dragon Flammie drops down and whisks us off to anywhere that wants to be explored.

Like many of the RPG’s in the Super Nintendo library, Secret of Mana breaks new ground on controls and mechanics. The attack gauge is a new mechanic that made a stick and move fighting style instead of spamming the attack button. Secret of Mana was celebrated on its Ring command menu, amazing soundtrack, and its colourful graphics. Love for Secret of Mana is still being felt today with its remake in 2018 as well as it being released on virtual consoles and on the SNES classic.

More information on Secret of Mana can be found HERE 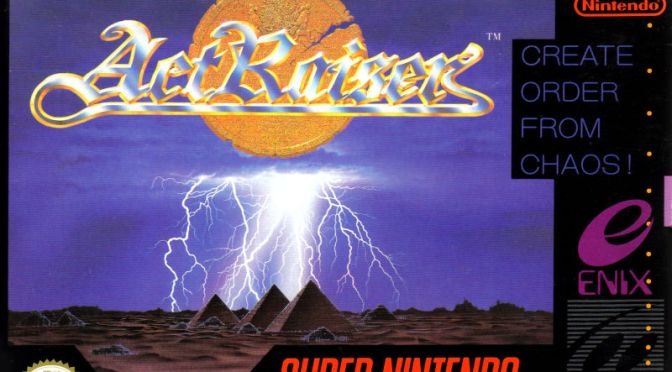 ActRaiser is strange gem among the vast Super Nintendo library. ActRaiser takes two different styles of games and smashes them together. Side scrolling platformer and top down strategy like Sim City. At first it seems like a strange combination, though it works very well. You drop into the platformer to fend off boss monsters, then return to the top down to help the people grow there society.

The top-down segments play very much like Sim City. You direct the people on where to build their settlement while fending off creatures trying to destroy the settlement. You play as a fallen angle there to help ward off the evil monsters that have had control over the land. You have a set of abilities and commands that help you along, like creating lightning to burn down trees, bushes, and destroy rocks. The main objective in the top-down segment is to expand the village, level up, and seal off all the monster spawn points. It is very rewarding gameplay, as well as entertaining. While the people are building you are fighting off the monsters that spawn in the overworld with your heavenly bow. This keeps the game entertaining by eliminating the “sit and wait” you have in Sim City.

The side-scrolling segments of ActRaiser consist of platforming and fighting monsters. The levels flow well, and the controls are tight. I feel like an entire platforming game would have been among one of the best on the SNES. At the end of the level you will encounter a boss monster that is keeping the village of the over world from growing. You must defeat the boss for the story to continue. But worry not, the boss fights are not overly intense but deliver the right amount of challenge.  After beating the boss, you can move back to the overworld to see what awaits you next.

ActRaiser is simply one of the better games in the Super Nintendo lineup. It is an interesting combination of game genres, with great gameplay that keeps you engaged. If you have never played ActRaiser I strongly suggest trying it out. You can find the game at a decent cost on Amazon, or, find another way to play it, if you know what I mean. Overall this game gets an A out of 13.5.