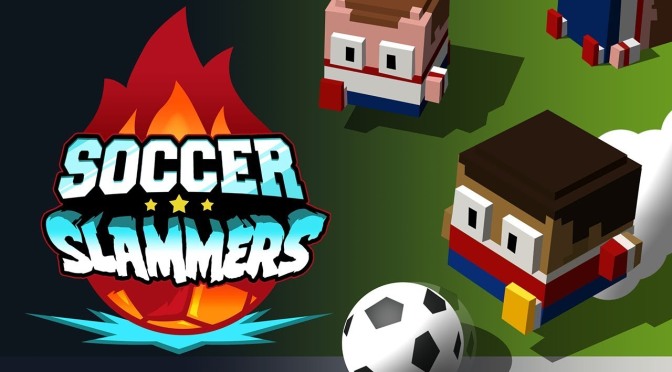 Soccer Slammers is a game made by Atooi, A great Indie development company ran by the main man Jools Watsham. Atooi has made some outstanding games in the past and Soccer Slammers is another game in the long lists of games they have produced.

This game is an excellent arcade game which has released at a perfect time; Just in time for the World Cup. Compared to past games I have found that this game has a lack of polish which most of his games have had in the past, which I’ll explain later.

So what’s the score

The game is simple, and that’s its charm. You control one person in a two-person team (Multiplayer has player 2 controlling the second) and the goal is simply to score in the others goal. Come on we have all played Football before we know how this works.

You have four moves you can make. B = Pass, A = Shoot, Y = Tackle and R = Boost. I tell you this now because of the tricky things about starting the game up first time is that unless you go into the options the game does not tell you what the buttons are. Which is not a problem, but something that could be incorporated into the start up sequence for first time players.

However once you learn what button does what the game play is refreshing and challenging, the AI is on point and Jools needs a well done for how well it responds to you and how well it works, all leading up to a great experience.

Quick match lets you pick any team and choose there difficulty and your enemies and then pits you head to head with that team. This mode lets you play with up two four players. Which is a huge selling point because it is quick and easy fun. However, I have one annoyance about this mode. There is no acknowledgment of the game you have played. As soon as the game is done it sends you straight back to the start, there is nothing saying “You won” or just acknowledging that you have played a game. This has meant that this mode has not been my mode of choice because it feels like I’m not accomplishing anything.

The beef of the Content however is in World Cup mode. This is exactly what you would think it would be. Every team and one winner. This is so much fun. However, disclaimer I’m rubbish at the game and never won. But playing it was truly fun.

That’s one thing to note about this game. This game is hard. Its not simple. Be prepared to lose and shout at you’re Switch Screen.

As you can tell from the review I have mixed feelings for this game. Some aspects of it shines and other parts of it falls short. As stated at the start Atooi has made some excellent games and they should be commended. And that’s why it’s in my opinion if you have yet to try their other games I would suggest going there first. But I would also not tell anyone not to get this game because at times its really fun and I can see it being right up some people’s street. For £8.99($9.99) I would give this game a Maybe score.