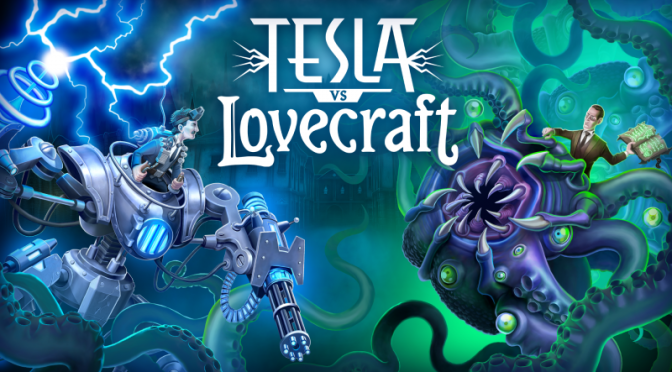 Tesla VS Lovecraft – What You Need to know!

Tesla VS Lovecraft is a top down, twin stick shooter. Nikola Tesla has just uncovered his ability to harness the power of electricity.  A fiction writer by the name of Lovecraft gives him a stern but mysterious warning.  In short, he tells Tesla not mess with what he doesn’t understand.  This leads to an all out mech war between the two men.  You play as Tesla defending against the onslaught of fantasy creatures from Lovecraft’s mind.

Tesla is your main character.  One of the main issues I had with this game was that I wanted to play as Lovecraft and control his hordes of literary nightmares.  Unfortunately, the game only allows you to play as Tesla.  This is a huge misstep in the game because had they gone the extra mile to include a Lovecraft side, there could have been a great vs multiplayer mode.  Instead, the game chooses sides for you.

When I first opened the game, I didn’t know what to expect from it.  The opening cut scene immediately grabbed my interest.  When the first level started, I audibly groaned.  The last twin stick shooter I reviewed for 10tons was Jydge.  I lambasted some of the options of that game on the podcast because it felt too much like a mobile game in ways that it shouldn’t on a console.

I am happy to report that every criticism I gave that game was improved in Tesla VS Lovecraft.  Tesla VS Lovecraft doesn’t use achievements to open new areas of the map.  The game doesn’t give you pointless tasks that require you to play the same levels repeatedly.  You get a full experience that you can just go right through.

Tesla VS Lovecraft – Play or Pass?

Tesla VS Lovecraft is a great option for you no matter where you play.  The game is available now on XBOX One, PS4, and Nintendo Switch.  You won’t get bored playing because every experience will be new and fresh.

Tesla VS Lovecraft for XBOX One, PS4, and Nintendo Switch – PLAY!