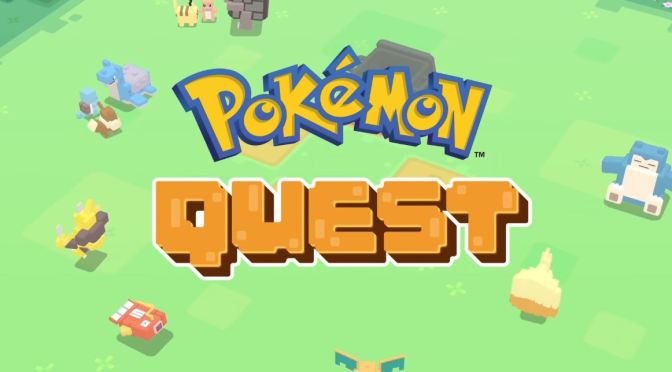 New Pokemon on the Way!

What a way to start the day! Three new Pokémon games announced for the Nintendo Switch and a full main RPG core title announced for next year. Here at Quest4Pixels, we will be talking a lot about these games in the coming days so for now let’s focus on Pokémon Quest the latest Pokémon game to hit the switch this morning.

This is just a  first look at the game, what the game is, how the game is played and whether or not you should download it. First off, everyone needs to download this game, I have 3 hours already under my belt because it’s so addicting.

The game is based on an island called Tumble cube Island. All the Pokémon on this island are from the Kanto region, and Yes they are all indeed cubed versions of the Pokémon.

The game lets you choose a partner Pokémon, Charmander, Squirtle, Bulbasaur, Pikachu or Eevee. I chose Pikachu. You use your Pokémon to face waves of Pokémon in ether 3-4 waves with a boss Pokémon on wave 4.

There is nothing new here in the core gameplay, lots of games have horde modes. What makes Pokémon Quest stand out is that you can customize a team of three Pokémon with all the Kanto Pokémon Quest, the catch, you must catch them all.  You do this by cooking nice treats in the cauldron in your base camp.

Your base is the main Hub for the game. Here you make meals which attract new Pokémon who become your friend and then can use in the main horde mode. Throughout the game, you unlock statues and other decorations that you use to decorate. You’re base, and some of them add benefits like leveling up faster.

Yes, Pokémon levels up like in the normal RPG games. However, there is also extra ways of strengthening your Pokémon charms. These add strength and HP to your Pokémon and the rarer ones even give you extra benefits like 5% critical hit chance.

A final word of warning. This is a mobile style game, which means it is free, but uses an in-game currency which you can buy more off through the Nintendo E-shop. However, this is not needed to play the game. I personally purchased the cheapest DLC called the expedition kit which for $5 gives you an extra cauldron some in-game currency and some decorations.