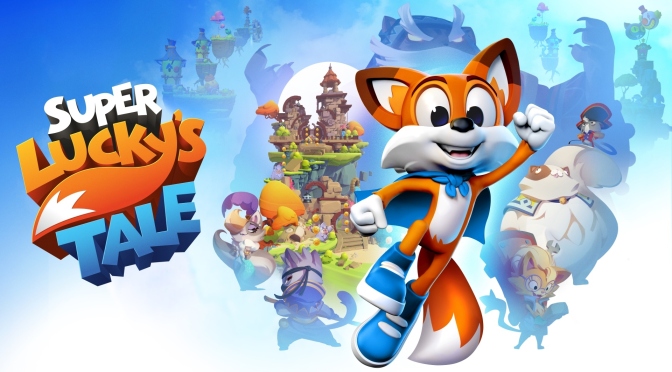 By: Joel Brooks aka Falcon

The Unlucky Tale of a Fox Named Lucky

I have a confession to make. It has been a little over two weeks since I have touched my Switch. I know, I know, let me explain. This started with a huge marketing campaign by Xbox for Game Pass, a monthly subscription to over one hundred Xbox titles. For the low price of $11.99 CND ($9.99 USD) I decided to give it a shot.

There are some amazing games on Game Pass! One that has me really hooked is Super Lucky’s Tale. Now, if you have heard about this game, you might be thinking, “you’re hooked on this mediocre 3D platformer?” Yes, and let me give you my thoughts on why I think it reviewed poorly! Super Lucky’s Tale was released on November 7, 2017, just 11 days after Super Mario Odyssey. This unlucky fox… named Lucky… fell victim to the Mario effect.  Let’s take another look at this cute little fox named Lucky outside of the massive shadow that Mario cast.

Super Lucky’s Tale is a 3D platformer that has a lot of the problems that affect all 3D platformers, but the charm and art style of this game makes it easy to overlook the game’s shortcomings. If you’re looking for a super challenging game play and tight platforming, this may not be the game for you. In Super Lucky’s Tale, there are a variety of tasks to complete in each level. The game is a very enjoyable experience. What I enjoy most about this game is that it’s the perfect introduction to 3D platformers. I enjoyed seeing my son experience this game genre for the first time.

After my time with Super Lucky’s Tale, what do I have to say and think about it? I enjoyed how welcoming this game was and how easy it was for anyone to play no matter the skill level. Another great thing that this game has going for it is that it’s included with Game Pass. In the end, Lucky wasn’t so lucky when it first came out. Game Pass makes me believe Lucky will find new life and win the hearts of Xbox fans.